How to Revise Your Scenes with This Simple Blueprint

I absolutely love to revise using other writers’ work as a template or blueprint. For one, I learn different ways to structure parts of my narrative. But more importantly:

A blueprint imposes constraints that free my creativity.

This month’s Margin Notes is a super-mini masterclass on scene structure, thanks to a passage from John Cheever’s story, “The Brigadier and the Golf Widow.” It includes an exact blueprint for you to revise your story scenes.

Here is the unmarked passage for you to read first:

Margin Notes on The Brigadier and the Golf Widow (Click here if you want a larger PDF version): 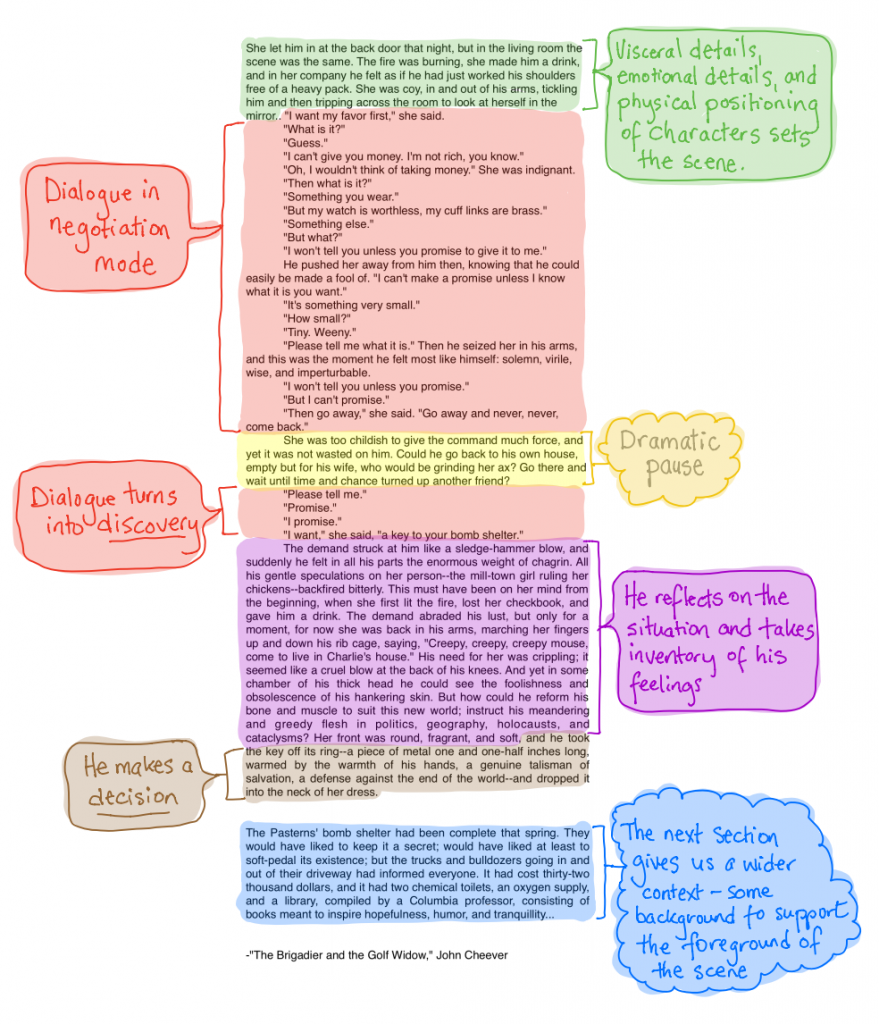 The first thing Cheever did in building his scene was to set the stage, so to speak. He did this in three simple ways:

Once the stage is set, Cheever launches straight into the dialogue. In the next Margin Notes, I’ll examine how to construct dialogue as negotiation, including the use of a particular type of moment for generating instant tension, but for now I want you to merely note that the characters in this passage demonstrate the interesting notion that dialogue is ALWAYS one of three modes: negotiation, seduction, or conflict. Or, a combination of these three (obviously seduction is also a part of this dialogue).

I’ve read a lot of early drafts in which a scene is filled with wonderful activity, but that’s all it’s filled with: activity. By the end of a scene with only activity in it (e.g. two lovers arguing intensely), a reader consciously or subconsciously wonders, What was the point of that scene? What did it mean?

Activity must eventually rise to action. The moment Cheever’s dialogue starts to make a shift from activity to action is when she presents the ultimatum: if you’re not going to do this for me, then you must go away and never, never, come back. And the readers naturally wonder: Ooh, how is he going to respond to that?

Well, Cheever knows this is the perfect chance to halt for a moment.

Get Margin Notes sent to your inbox!

(See how I did that? Paused just before talking about dramatic pauses.)

This is precisely what pauses do: they infect the scene with a germ. Even when the pause is shorter than the one here. Even when it is a brief moment of silence or speechlessness.

After keeping us in suspense for a moment, Cheever returns to the dialogue. Note the brevity of this section. If it were much longer, the tension would have fizzled out. Plus, during the dramatic pause we came to understand his motivation for the promise he makes in this section. Cheever doesn’t want us to forget this motivation. And he doesn’t want too much else to happen in the scene or we might have reason to wonder whether his motivation has changed.

This short section of dialogue contains the turning point: the moment when she reveals what it is she wants from him. According to Robert McKee, turning points in scenes have four effects on the reader:

But here is the even simpler, more brilliant thing I want you to take from this mini masterclass to try in your own revisions: this section of dialogue contains a DISCOVERY. (The discovery that she wants his bomb shelter key.)

Some while back, when I was trying to gain a better understanding of how to build a story scene, I was getting really frustrated by hearing the same advice over and over, which was that:

Change? What should change? I’d revise my scenes without knowing if the “change” in my scene was the kind of change they meant, and if it was a big enough change. “Change” is too vague, I thought, as my forehead thumped onto my desk.

After studying probably close to a hundred scenes from novels and short stories, I was folding laundry when it finally struck me: every good scene I’d read resulted in at least one of two things: a DISCOVERY or a DECISION.

That’s it. One of those two things. Or both. The discovery (some new important piece of information, something new learned) can be small yet significant, or wildly life-altering. Same with the decision.

Simplifying my perception of my story scenes in this way uplifted me and my craft. It made me feel a new sense of control and capability over creating and re-creating my scenes. Discovery or decision. That was easy to remember. Easy to focus on, achievable, yet so powerfully transformative to my stories.

Now that the discovery has been made, Cheever zooms into the character’s inner world once more. The character assesses his situation, feels certain reactions, takes inventory of things. We watch him decide what this scene has meant for him. This is like the “retreat” step of the Approach-Retreat-Return model we tried out in the mini masterclass on Character Perceptions. Take note, too, of how much narrative space* (compared to the other sections in the scene) Cheever takes to depict the character’s thoughts in this section.

After taking inventory of his situation, the character makes the decision to give her the key. This is optional because Cheever could have chosen to have this decision arise later in another scene. Conversely, you could have your character make a decision in place of the earlier moment of discovery.

Additional Tidbit: Remember how Cheever started this scene with the character feeling that he was burden-free with her? Well, that has completely shifted to the opposite by the end of the scene. He feels an enormous weight. Plus, we feel the weight of terrible possibility: what will his wife say if she discovers this?

Really, the decision ends the scene. However, I wanted to include the start of the next scene because it’s a common technique Cheever uses: start with a wider view of things before funnelling down into the next scene.

This passage about the bomb shelter and the neighbourhood shifts the narrative distance to a panoramic view.* With this view, the story depicts the background or context of the narrative. The foreground of the narrative holds more meaning for us as a result.

*(For an introduction to Narrative Distance and Narrative Space download my free Story Revision Starter Kit below. For an in-depth understanding of how to revise your narrative distance, check out the Reimagine the Page Course.)

Before I give you the Recipe Card to try this out for yourself, I want to add an important, if not obvious, caveat: this blueprint is not intended to be used in every single scene you create. The rhythm of your story would start to feel predictable. Practice this a few times, revising a few scenes from your draft using the blueprint. Then you’ll be able to tweak other scenes in your own way to create new blueprints.

Click here if you want a larger, printable PDF of the Recipe Card. 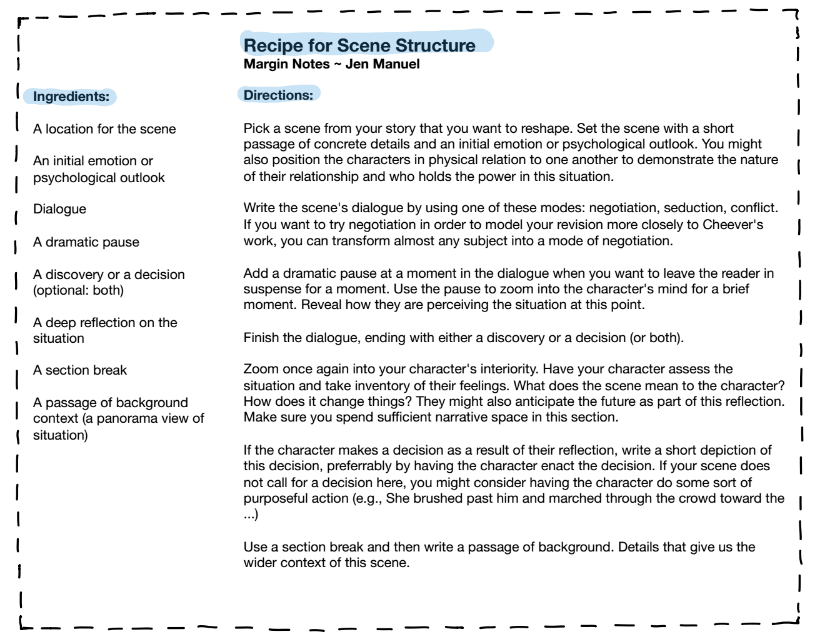 In the opening paragraphs, I claimed that constraints, like using templates, actually frees my creativity. What do you think? Are you using constraints intentionally in some way? Leave me a comment below!

I think the writing community is one of the most generous I’ve known for sharing and helping one another. It would me sure help out a lot and I’d appreciate it truly.

It won’t take more than 10 seconds of your time. The share buttons are right here:

How to Save Your Story with One Single Thing